Artist to lead team in transforming transit center to honor May 26th attack victims and survivors, in response to outpouring of community support

The attack on a MAX train pulling into the Hollywood Transit Center on May 26, 2017 forever changed lives and deeply affected TriMet and our community. Now the efforts to honor the lives lost, the strength of those who stood up to hate and the emotional outpouring in the days after the attack are moving forward with the selection of an artist to create a Tribute Wall.

Sarah Farahat will lead a team of artists to transform nearly 2,000 feet of wall space at the Hollywood Transit Center into a vibrant tribute reflecting the spirit of the heartfelt messages and images that family, friends and strangers had created on the walls in the wake of the incident. After reviewing concepts from four finalists on Wednesday, Jan. 31, the Hollywood Transit Center Tribute Wall Advisory Committee chose Farahat and her team to complete the project. Farahat provided a conceptual rendering for the Tribute Wall; however, she and her team will receive input from the advisory committee and impacted family members in creating the final design. 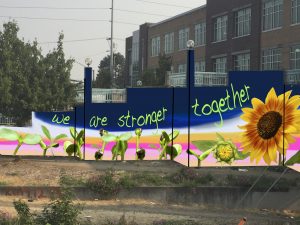 “I am deeply honored that the committee and TriMet have entrusted this project into our care. I look forward to sharing more about the project in the coming weeks after speaking in depth with the review committee. I have a very committed team of artists, educators and activists that will come together in the next few months to not only create a beautiful memorial, but also to cultivate further understanding across differences to celebrate our city’s richly diverse cultural heritage, and to demonstrate the fierce love that Portlanders are learning to show for each other in these difficult times.”

Sarah Farahat is an interdisciplinary Egyptian American artist and educator holding a B.A. in Psychology from Occidental College in Los Angeles, California, a B.F.A. in Intermedia Studies from Pacific Northwest College of Art in Portland, Oregon and an M.F.A. in Interdisciplinary Fine Art from California College of the Arts in San Francisco, California. Her work, grounded in grassroots activism, explores the location of the body within sociopolitical landscapes.

TriMet has planned two tributes at the Hollywood Transit Center but is slowing the timeline for a plaque to commemorate those at the center of the May 26 attack. While initially planned to for completion and unveiling on the one year anniversary of the attack, more time is needed to develop the most appropriate design and message. TriMet does not want to rush a tribute that is so important  to us, the community, the families of the men who died and those who survived that day. Once fully developed, the plaque will be part of a permanent tribute at the Hollywood Transit Center.

Work on the tribute wall got underway in April. The wall art will be completed before the end of the year.  While it will last longer than the original chalk messages, this tribute wall is meant to be temporary due to plans to redesign and redevelop the aging transit center in the coming years.