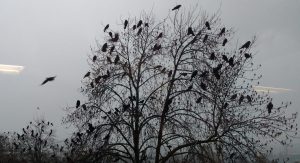 From dusk until dawn, every fall into spring, the Portland Transit Mall becomes home to thousands of crows that roost downtown as night falls. Traveled by 1,570 TriMet buses and 298 MAX trains every day, the Transit Mall spans more than 57 blocks, and lies in the heart of the crows’ seasonal nighttime crash pad. Along with the annoying nonstop noise they generate, comes the messy and unpleasant problem of…poop. 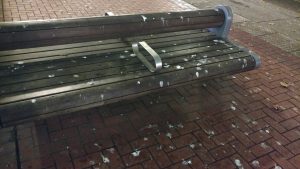 The waste from 7,000 to 10,000 crows can foul up an area fast. It creates a problem for transit riders and others using the mall, especially during the early morning hours. The droppings can soil sidewalks, benches, public artwork, bus stops and MAX stations. TriMet pays Portland Mall Management, Inc. (PMMI) more than $1.5 million per year to clean and maintain the transit mall. It was staff at PMMI that conceived the idea of using trained raptors to deal with the problem. So far, they’re having some success with it.

An airborne scarecrow that really works 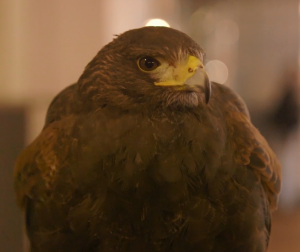 Clive, a young Harris’s hawk, is the latest weapon in the fight against crows and their daily droppings. He belongs to Kort Clayton, owner of Integrated Avian Solutions, a Portland-based company that uses falconry techniques as a sustainable, natural and non-lethal way to reduce nuisance bird problems. He says pest birds have an intrinsic fear of Clive and his fellow raptors. “They don’t pursue the crows, they don’t catch the crows, they’re not killing the crows,” said Clayton. “The crows know that they’re a dangerous presence and the crows go somewhere else, and our mission is accomplished. At the beginning of the day, and still at the end of the day, the Transit Mall is clear of crows.”
Watch Clive, a young Harris’s hawk, help clean up Portland’s Transit Mall

About the Portland Transit Mall 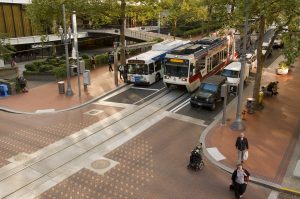 The Transit Mall is Downtown Portland’s transit hub. It runs south-north along 5th and 6th avenues through the heart of the city.  Three TriMet MAX lines and 16 TriMet bus lines, along with CTRAN buses, run along the mall.  Opened in 1977, buses were the only transit vehicles using it until light rail trains were added in 1986, with additional rail lines added in 2009. Pedestrians, buses, trains, cars and bikes all use the Portland Transit Mall, so it’s important to be aware, use caution and obey all signs and signals.