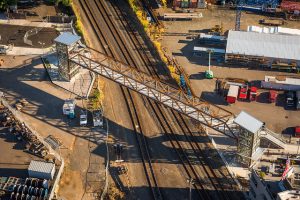 The Rhine-Lafayette Pedestrian Overpass in southeast Portland will be undergoing improvements to increase the reliability of the bridge’s elevators. The project will require the full closure of the Rhine-Lafayette overpass at times. We will install HVAC equipment inside the elevator towers to regulate the temperature and humidity year-round. We also will be installing canopies over both elevator towers and adding drainage at the base of the towers to prevent rain from getting into the elevator mechanisms.

The improvements will take about six weeks and require the full closure of the Rhine-Lafayette overpass at times. The first full closure of the bridge begins the first week of December. The elevators will be shut down for three days, with the stairs open early and later in the day to reduce impact on nearby schools and businesses.

During the closures, a detour will guide pedestrians and cyclists north to SE Powell Boulevard to cross under the railroad tracks. Those who use the Rhine-Lafayette overpass should plan an extra 10 to 15 minutes to navigate the detour between both sides of the bridge.