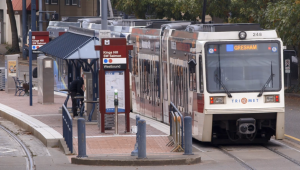 TriMet is considering closing four MAX stations in Downtown Portland and we want feedback from riders and the public. The stations being considered for closure include: 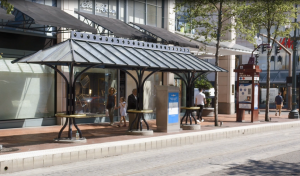 MAX Blue and Red lines serve all the stations. Removing the stops would help trains move more efficiently through Downtown. TriMet estimates trips between the Goose Hollow/SW Jefferson St and Old Town/Chinatown stations would be about two minutes faster.

As we looked to speed up trains through Downtown Portland, we considered distance to nearby stations, ridership and the flow of the trains. We believe these four stations are the right ones to close to reduce travel time while maintaining the transit service people value and count on every day.

Nearby stations less than ¼ mile away 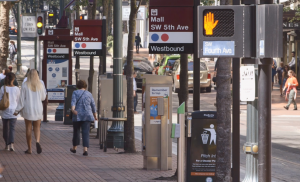 TriMet has identified the four low-ridership stations for possible closure based on their short distance – less than a fourth of a mile – to other MAX stops.

TriMet already closes the Kings Hill/SW Salmon St Station for Portland Timbers and Thorns games due to safety because of the large number of fans and the tightness of the station.

TriMet has conducted a Title VI equity review of the proposal to close the four stations. It found no adverse impact on minority or low-income populations. That’s due to the short distance to nearby stations. Even for those with mobility issues – with remaining stations less than a fourth of mile away – that falls well within the half-mile service availability threshold under Title VI.

TriMet’s draft proposal is to close these closely spaced low ridership stations September 1, 2019, which would require the approval of TriMet’s Board of Directors.