TriMet riders—especially those commuting across the Willamette River—are urged to build in an extra 30 to 60 minutes for trips during the scheduled arrival and departure of ships that are part of the Rose Festival’s 2018 Fleet Week. The fleet will pull into port at the Portland Waterfront Wednesday and Thursday afternoon June 6 and 7 and depart Monday morning, June 11. Since both the arrivals and departures will raise bridges during afternoon and morning commutes, TriMet is asking riders to be flexible and patient, and to schedule extra time to get where they’re going.

Once the ships are in, avoid downtown parking costs and hassles and take TriMet to enjoy visiting and touring the ships during Fleet Week, an event steeped in tradition. Fleet Week has been a part of the Rose Festival since it began in 1907, and one of its purposes is to celebrate and thank active and reserve military personnel and all veterans. TriMet wants to help you join in the festivities. 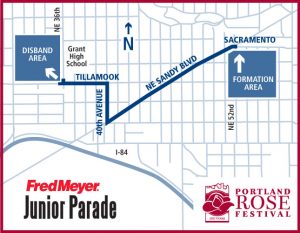 The same day the ships start to arrive, the Rose Festival’s Junior Parade will take place.  Wednesday June 6 from 1 to 2 p.m., the parade will wind its way through the Hollywood District closing several streets in the area.

TriMet is always working to ensure that our riders enjoy a safe, positive, worry-free and user-friendly experience each time they board TriMet. Our Rider Support Team is on the job for you seven days a week from 7:30 a.m. to 5:30 p.m. Reach them at (503)238-RIDE (7433) and on Twitter at @trimethelp.