The theme for this year’s Rose Festival is “Play Happy”, and you can start doing that by avoiding the stress of parking and ride TriMet to and from the festivities. The fun begins Friday, May 25 when Portland’s annual Rose Festival kicks off with CityFair at 5 p.m. at Tom McCall Waterfront Park. Opening night events include free entertainment courtesy of the RoZone concert series, followed by Opening Night Fireworks.

Here are some things to know for riding TriMet to join the festivities:

You’ll want to ride TriMet to and from the parades, the colorful centerpieces of Portland’s Rose Festival that attract hundreds of thousands of revelers to Downtown Portland. Plan ahead and allow extra time while traveling to all parades. 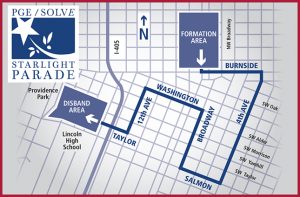 The Starlight Parade starts at 8:30 p.m. Saturday, June 2, and attracts thousands of parade goers who take transit to avoid parking hassles. Be patient and expect some delays at MAX stations in Downtown following the parade as everyone leaves the area at the same time. We will get you on your way. 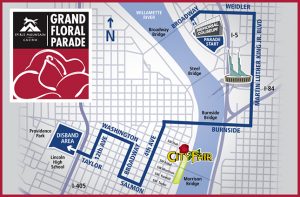 June 9 from 10 a.m. to about 2 p.m.—typically prepares for more than 500,000 spectators each year, so it’s understandably one of TriMet’s busiest days of the year. Plan ahead and go early to that parade as well. We’ll have staff out and about to help you navigate to, through and home from both parades.

The Rose Festival Junior Parade celebrates the children of Portland on Wednesday, June 7 starting at 1 p.m. in the Hollywood District.

Shore up plans for a shipshape Fleet Week

Take transit to check out the big ships docked along Waterfront Park for Fleet Week. But plan ahead for delays when the ships come in and leave. This year, ships begin arriving Wednesday June 6 and are scheduled to depart Sunday June 10 and Monday June 11. This will cause delays for all MAX lines as well as for buses that use the Broadway, Burnside and Steel bridges. Few Rose Festival events are more steeped in tradition than Fleet Week. It has been a part of the Rose Festival since it began in 1907. One of the purposes of Fleet Week is to celebrate and thank the active and reserve military personnel and all veterans.

We’re just getting started! There’s more Rose Festival fun for you and the family. Go to rosefestival.org to learn about all the different events. Then, head to TriMet’s online trip planner to easily plan your trip with information on travel and walk times, transfers and cost. Visit trimet.org.