More people are enjoying the benefits of Hop Fastpass™ as the next phase of the electronic fare system rollout nears. Beginning in June, riders will notice changes coming to ticket vending machines at rail platforms as TriMet transitions them to Hop machines. The machines will begin dispensing paper Hop tickets – 2 ½-hour and 1-day Hop tickets – with embedded chips. Also, beginning August 1, major retail outlets Albertsons and Safeway will transition to selling Hop cards only. The Hop card allows benefits that paper fares cannot such as getting the best fare without the upfront cost of a pass, only paying for the rides taken, easy reload options and lost-card protection. 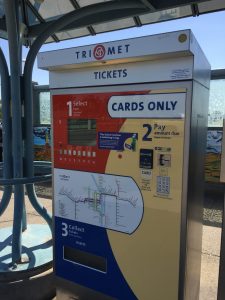 Next month, TriMet crews will begin converting the machines on rail platforms that riders use to purchase fares to Hop machines that dispense Hop tickets. It takes a few days for crews to change out a machine so expect the transition of 246 TriMet ticket vending machines to take about four months.

What does this mean for riders? They still can use cash and payment cards at the machines to purchase fares. Instead of traditional paper tickets, they will get a Hop ticket.

The Hop paper tickets have a chip embedded in them. When riders tap at a card reader, this technology communicates to the Hop system and provides proof of payment. TriMet staff and Transit Police will carry devices that allow them to verify the Hop ticket. Those using an Honored Citizen or Youth Hop ticket may be asked for ID as proof of eligibility for the reduced fare. Unlike the plastic Hop card, the paper Hop tickets cannot be reloaded for future travel.

The Hop tickets can be used to transfer between transit systems as long as the fare on the service transferring to is less than or equal to the fare on the service transferring from. For example, riders can use the Hop ticket to transfer from TriMet to Portland Streetcar, but not from TriMet to C-TRAN Express. Those who ride a combination of TriMet, Portland Streetcar and C-TRAN would benefit more by purchasing a reloadable Hop card. 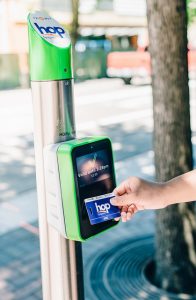 Major retailers Albertsons and Safeway will transition to Hop card sales only and phase out their traditional paper ticket stock beginning August 1. (They will continue to sell LIFT paper tickets.) Kroger stores Fred Meyer and QFC will continue to sell both Hop cards and the old-style paper tickets until they transition to Hop cards only at a later date. Smaller retailers as well as convenience stores such as Plaid Pantry already only sell Hop cards. Riders can reload money on their Hop cards at any store that sells the cards. Some 400 outlets currently sell and/or reload Hop cards with the goal to expand that to more than 500 retail outlets in the future. The Hop card does cost $3, but that is a one-time fee unless the card is lost or destroyed. Riders can learn more about paper tickets and transitioning to Hop at trimet.org/papertickets.

Hop cards are easy to use – and better than paper

Get the best fare so you save as you ride
Get the savings of a day or month pass without the upfront cost of a pass. For an Adult, a month pass is $100. With Hop you can avoid that upfront cost and pay as you go!

Don’t waste money on fare you don’t use

Let Hop do the math

Hop has many convenient ways to pay

Learn more about the ease and benefits of Hop.

Hop is the next generation of transit fare, offering a cash-free, hassle-free option that’s valid throughout the Portland-Vancouver metro area. Use it to pay fare on TriMet, C-TRAN and Portland Streetcar. It’s one more way TriMet is Making Transit Better. Hop Fastpass – a better way to pay!