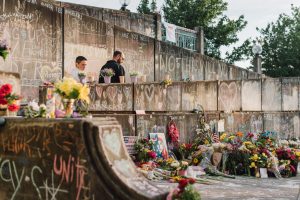 Nearly eleven months ago, messages of sorrow, support and resilience covered the walls of the Hollywood Transit Center following the horrific attack on May 26, 2017. Now work has begun to transform the gray walls once again.

TriMet has commissioned artist Sarah Farahat and a team of other artists, educators and activists to create a mural on the walls that line the ramp and stairs at the transit center – more than 2,000 square feet of space. With spring showers finally giving way to some dry weather, the artists began work on Friday, April 20.

The mural will honor the two young women targeted, the two men who lost their lives – Taliesin Myrddin Namkai-Meche and Ricky Best – and a third man who was critically injured – Micah Fletcher. The tribute will also recall the touching spontaneous memorial that sprang up at the transit center in the days following the attack.

“The background colors represent the shift from sunset to night,” Farahat explained of the design. “The Western peony, a native Northwest perennial, winds through the mural. It is known to hold amazing medicinal properties to aid in the grieving process. Its process of seeding is visually appealing: The petals drop and the seed pods emerge from the center of the flower. On the walls, the peony ultimately blooms and then fruits in the dark background on the large walls facing the light rail platform, symbolizing the strength of standing up for what you believe in despite difficulty.”

The mural will also feature excerpts of the poem “Awakening,” by Climbing Poetree, in eight different languages: English, Chinese, Russian, Somali, Spanish Vietnamese (all the City of Portland uses for voting documents) as well as Arabic and Chinuk (the language of people native to the area). A plaque commemorating the mural project will include a translation of the poem.

“The poem speaks of a world where we have the potential to be safe in our bodies, in a generous and full way, to be of greater service to each other,” said Farahat.

The interior walls, along the ramp, will feature a train, co-designed by Jamaali Roberts and Farahat, which will include the Hamsa, an ancient symbol of protection used in Christian, Jewish and Muslim traditions. The words Namkai-Meche spoke after being mortally wounded, “Tell everyone on this train I love them” will appear on the wall along with several phrases from the spontaneous memorial and a ‘statement of needs’ created by Beaumont Middle School students during workshops with Farahat and team member Lindsay King. Learn more about Farahat’s team