TriMet inaugurated its largest service expansion in years bright and early Monday morning, March 5, 2018 with simultaneous ribbon-cuttings around 6:30 a.m. on two new bus lines – Line 74-162nd Avenue on the east side and Line 42-Denney/Hall on the west side. Three new bus lines and other improvements to existing bus service and MAX Red Line schedules come in the third year of TriMet’s 10-year service expansion plan. The improvements reflect transit investments in Beaverton, East Portland, Gresham, Milwaukie, Tigard and Troutdale, and offer new opportunities to connect people with jobs, schools, services and other opportunities throughout the region.

State and local dignitaries and transportation advocates joined TriMet and members of the TriMet Board of Directors in celebration starting at 6:00 a.m. 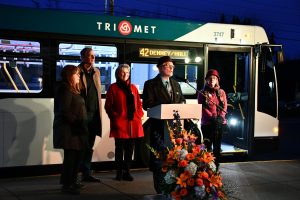 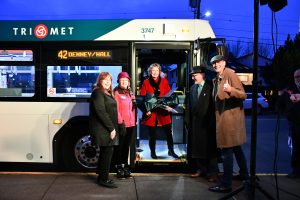 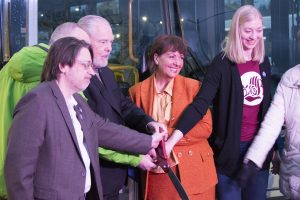 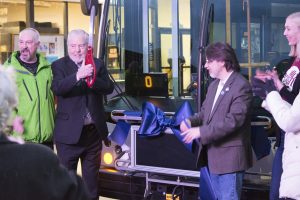 Spring 2018 improvements mark largest service expansion in years
In addition to the Line 42 and Line 74, TriMet’s spring 2018 service includes a third new line, Line 82-South Gresham for improved service in eastern Multnomah County, as well as route changes, added service and schedule adjustments for better transfers on a number of other lines. We also are expanding MAX Red Line service to Portland International Airport with trips later into the night and more service. For a complete list of changes, visit trimet.org/servicechanges.

Making Transit Better
These improvements are just some of the ways TriMet is making transit better. We continue to plan for the future, addressing transit needs along our region’s most congested corridors while reinvesting in our system by renovating MAX stations, replacing critical light rail infrastructure and purchasing new vehicles.